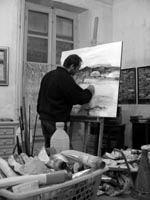 At the end of the 80s, Thierry Marchal joined the association of painters Josassiens to perfect and better live what became a passion. He then met many artists with whom artistic exchanges were enriching, very quickly he realized his first exhibitions in Paris (Galerie Thuillier, Place des Vosges).

At the same time, Thierry Marchal is active in art publishing, in collaboration with the Georges Pompidou Center (Beaubourg, Musée des Arts Décoratifs de Paris) and the Flammarion publishing house.

In 1995, Thierry Marchal discovered Lourmarin by exhibiting in the Karas space, but it was not until 1998 that he settled permanently in the heart of the village. Thierry Marchal then abandoned the art edition to devote himself exclusively to painting. Since then, numerous exhibitions punctuate his new life: Paris, Marseilles, Saint Paul de Vence, Courchevel, Megève, Honfleur, Montpellier, Toulon, Villeneuve in Aveyron, Passau (Germany).

Thierry Marchal's picture
In 1999, Thierry Marchal set up a permanent exhibition at the Galerie Vu in 7 Angles in Lourmarin, where he will reside for 3 years. In 2003, Thierry Marchal opened his Galerie-Atelier in the heart of the village. In 2006, Thierry Marchal was invited by Marie Claire and Yannick Noah's association to the first Galas de l'Art at the Sofitel Vieux Port in Marseille.

To be determined Shipping
0 € Total